The girls and I have been watching some different Eagle Cams, cameras that are set up over a nest.  We’ve been watching two pretty intently, and I found a third one today.

They are keeping journals about the eagles.  They are supposed to record the temperature and any behaviors that they notice while we watch (just 5 or 10 minutes until hatching occurs).  At some point, they are also supposed to write a report on eagles for me as well.

So, links…  This is the first one we found thanks to a Twitter friend.  It’s in Minnesota, near Minneapolis, and according to what I learned, they layed their eggs really early.  They are expected to hatch near the end of February.

The second one is at Berry College in Rome, Georgia.  I have to say, I’m the most excited for this one, because it’s supposed to start hatching any day now!  If you have any questions, the people on the chat at Livestream seem to be really knowledgeable and friendly and will answer just about any question.  (Including the square root of Pi.)

I found the third one at Livestream as well.  It’s in Virginia, and they haven’t laid their eggs yet, but they are expecting that to happen any day now, as well.

It is has been so very fascinating to sit and watch these beautiful birds.  If you get a chance, just sit for a few minutes.  You will really enjoy watching these majestic creatures of God.

[eta – in case anyone doubts my sanity, here’s a picture of the setup.  Nest approach, camera 2 and camera 1.]

Isn’t this an interesting picture?  It’s both nests at the same time.  The right nest is at 19 degrees today, and the left nest is at 27.

Today, Boo and I got to participate in the Ford Driving Skills for Life program. It’s for newly licensed (or permit) drivers, and it teaches them some different skills for when they are driving.

One thing they emphasize is the dangers of distracted driving. They have the kids get behind the wheel and then try to send a text message. Here is Boo’s text:   Hi i’m busy driving. Let of stop before i fail
Here’s mine:  Y turn. This I isn’t easy don’t do it. P
They also got to try the “drunk” goggles, and they got to try to drive with them. Boo assures me that if that’s what it’s like, she will never get drunk. 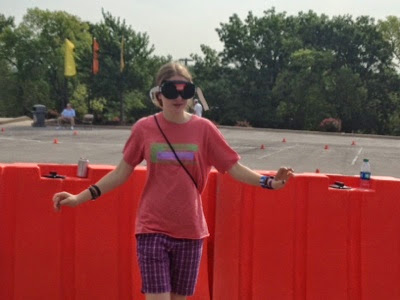 The ever so fashionable goggles. 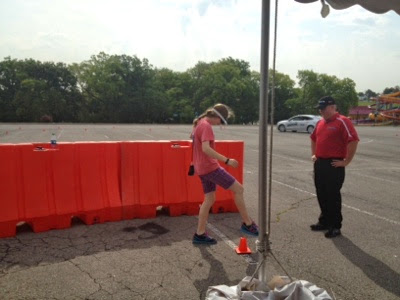 Trying to kick the cone.

They also got to do hazard avoidance, and pulling out of a skid. Its hard to make yourself spin out of control if you are used to being so careful.
We had a good time, and I think she learned a lot. Now to get in the 40 hours of driving practice!
Hugs,
Melinda 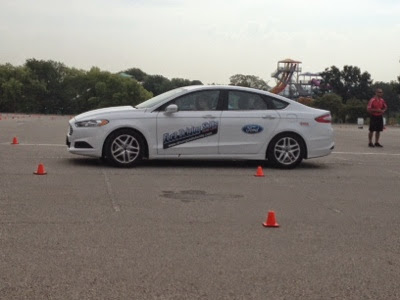 We went to the library yesterday. We love it. It has always been one of the best “field trips.” When we first started homeschooling, our library had a group called “Discovery Club,” that met twice a month. It was for homeschoolers. There was a whole range of topics, from Native Americans to manners.

Then a whole bunch of things happened, and now the “Homeschoolers at the Library” meets once a month.
But that’s not the reason for this post. We went to the library yesterday and ran into our favorite librarian, Ms. Jean. She has been there from the start of our homeschool journey, and along the way, she has become a friend. I hope everyone has a favorite librarian.
Hugs,
Melinda 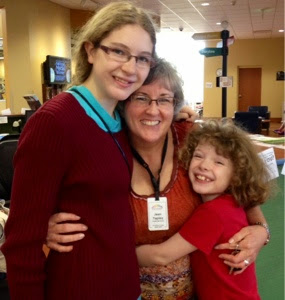 Okay. Reason number 934 that I love homeschooling. If you learn differently, it’s okay. However the information will stick, that’s what you do. Lol 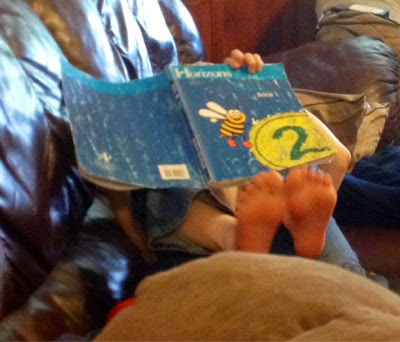 Yes, that’s Little Bit on the couch doing her math, upside down, with her feet in the air.

This post is part of Five Minute Fridays over at Lisa Jo’s blog.  Write for 5 minutes.  No editing.

And we choose not to get angry at the child who was supposed to be doing her schoolwork but apparently was not.  We choose how we respond.  Do we yell and scream?  Do we give second and third chances?  How do you deal with a teenager in high school who seems to have an elementary attitude towards school?

Life is all about choices.  Everything is a risk, everything is a gamble.  What I choose, what I risk might not be a gamble for you.  For you, it might be a sure thing.  We are all guaranteed life and love if we follow Jesus.  We are not guaranteed one single moment on Earth.  The only assurance we have is life eternal in God.

How do you choose?  Will you follow God this day?

As for the child who shall remain nameless, I choose to give grace today.  I choose to let her accept the consequences of not doing the required work.  I choose to try to respond in love, and not in frustration.  (This is big for me, ya’ll.)

Now to get back to school.  *sigh*
Hugs,
Melinda

[edited to add a picture of this staircase, because just like some of our choices, we don’t always know what lies at the top.  Sometimes you have to make a choice and just trust that there’s a beautiful view waiting for you.]